Home Guides What is the fret on a guitar?

You are a beginner who wants to buy a guitar. Or, you may be someone who already owns a guitar but wants to know more about how it works. In either case, you have probably heard the term "fret" and wondered what it meant. Here we will explain to you what a fret is, its purpose, and how it affects the sound of your guitar.

Why is it called a fret on a guitar?

A fret is a thin metal strip (usually made of nickel silver) that is embedded in the fingerboard of a guitar. The number of frets on a guitar varies from model to model, but most have at least 19 frets. The purpose of the frets is to act as barriers that divide the fingerboard into different playable sections. When you press down on a string behind a certain fret, the string will vibrate and produce a note.

The note will be higher or lower depending on which fret you pressed down on. The closer you get to the bridge (the end of the fingerboard), the higher the notes will be. The further away you are from the bridge, the lower the notes will be. All the 19 frets are meant to give the player a wide range of notes to choose from. If there were no frets, it would be much harder to play in tune. The frets also make it easier to play chords, since you don't have to worry about each string's individual note.

Which is 1st fret on a guitar?

The first metal strip all the way down by the headstock of the guitar is the first fret. The second and third frets are next, and so on up the neck of the guitar. The difference between all these frets lies in the distance between them. The frets get closer together as you move up the fingerboard. The first fret is the longest distance from the nut (the other end of the fingerboard), and therefore produces the lowest notes.

When you pluck a string, it will vibrate back and forth and produce a sound. The length of the string that is vibrating determines what note is produced. For example, if you plucked the low E string (the thickest one) and let it vibrate freely, it would produce a deep E note.

But if you pressed down on that same string behind the 12th fret, it would produce a higher E note. This is because you have effectively shortened the string by pressing down it. The 12th fret is exactly halfway down the string, so it produces a note one octave higher than the open string.

Pressing down behind any other fret will produce a note that is in between these two notes. The further you press down, the higher the note will be. The distance from the nut to the bridge also affects the pitch of the note, but we'll talk more about that later. 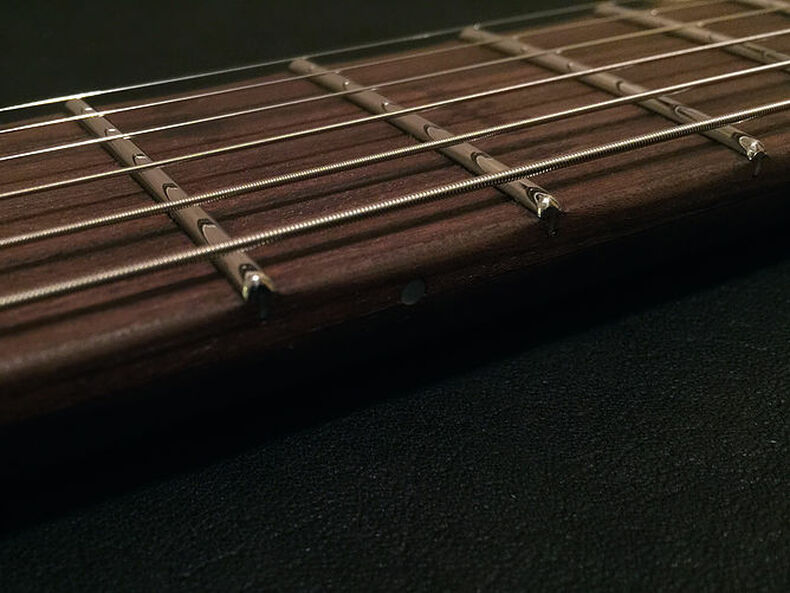 Frets on the guitar make it much simpler for a player to reach an acceptable level of intonation because they define the locations of the correct notes. Furthermore, chords may be played more precisely on a fretted fingerboard than on a non-fretted one.

Frets are not, however, necessary for all stringed instruments. The fretless bass guitar is played without frets for a variety of reasons: first, the smooth surface of the fingerboard allows for easier bending of pitches; second, "fretting out" (when a note stops sounding clear because the player has moved his or her finger beyond the appropriate fret) is less likely to occur; and third, on a fretless instrument it is possible to achieve a much wider range of tones because there are no frets that need to be cleared by the left hand when changing notes.

Do all guitars have frets?

Most electric and acoustic guitars today have frets, but there are some types that don't. The most notable exception is the classical guitar, which has nylon strings that are meant to be played without frets. Frets would damage the nylon strings, so they are not used. The classical guitar is meant to be played with a fingerpicking technique where each string is plucked individually.

Some jazz guitarists also prefer to play fretless instruments because they enjoy the "buzzing" sound that is produced when the string is pressed down behind the fret. This effect is more difficult (and sometimes impossible) to achieve on a fretted instrument.

Do all guitars have the same number of frets?

No, different guitars can have different numbers of frets. For instance, a standard acoustic guitar usually has 20 frets, while a standard electric guitar often has 22 frets. Bass guitars typically have 24 frets, although some models may have even more. The number of frets also determines the size of the guitar.

A guitar with fewer frets is usually smaller in size, which makes it more comfortable for young players or those with small hands. On the other hand, a guitar with more frets gives the player access to a wider range of notes.

How does the fret affect the sound?

The fret affects the sound of the guitar in two ways: intonation and action. Intonation is how in-tune the guitar is overall. Action is how easy it is to press down on the strings and make them sound. If the guitar has poor intonation, it will be hard to keep it in tune even if you use a tuner. This is because the distance between the frets is not accurate, and so the notes will be slightly off.

A guitar with poor action will be harder to play because the strings will be too close to the frets. This makes it more difficult to press down on the strings without making them sound buzzy. It can also make it hard to slide up and down the fingerboard.

The fret affects both of these things because it is what sets the distance between the strings and the fingerboard. If the frets are too close together, the action will be poor. If they are too far apart, the intonation will be off. The ideal distance between the frets depends on each individual player, so it is something that you have to experiment with to find what works best for you.

In conclusion, the fret is a thin metal strip that is embedded in the fingerboard of a guitar. The purpose of the frets is to divide the fingerboard into different playable sections and to act as barriers that make it easier to play in tune. The fret also affects the sound of the guitar by setting the distance between the strings and the fingerboard. This distance determines the intonation and action of the guitar. Thanks for reading! We hope this article was helpful in explaining what a fret is and how it affects your playing.

How many frets should a beginner guitar have?

The number of frets on a beginner guitar is not as important as the size of the fretboard. A guitar with a smaller fretboard will be easier to play because the frets are closer together. This makes it easier to press down on the strings without making them sound buzzy. It can also make it hard to slide up and down the fingerboard.

How do you play fret on a guitar?

Well, this is not an easy task for beginners, but we'll try to explain it in simple terms. When you pluck a string, the sound produced depends on which fret you place your finger on. The further away from the body of the guitar, the higher the pitch of the note. For example, if you pluck the low E string (the thickest one) and place your finger at the 7th fret, you will produce a high E note.

If you're having trouble finding the right spot, try holding down the string with your finger at the first fret and plucking the string. Then, move your finger up to the second fret and pluck the string again. Continue doing this until you find the spot that produces the note you're looking for. 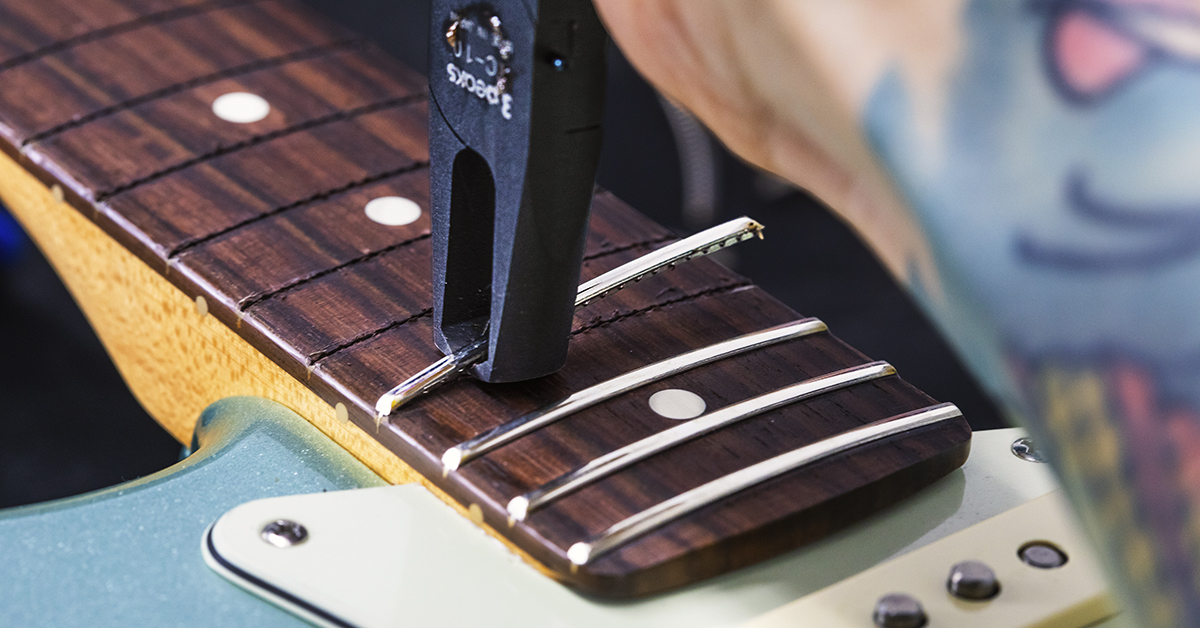 Now that you know where to place your fingers, you can start practicing some basic chords. Check out our guitar chord chart to learn how to play some of the most common chords. Thanks for reading! We hope this article was helpful in explaining what a fret is and how to play notes on a guitar.

How do you use a fret correctly?

When fretting the guitar, press your finger against the string. Your arm should be loose and your fingertips around the neck of the guitar. Your thumb should rest on the back of the guitar neck, securing your grip. The pressure you use should be firm enough to hold the string down, but not so hard that it buzzes or muffles the sound.

Now that you know how to hold down the string, you can start practicing some basic chords. Check out our guitar chord chart to learn how to play some of the most common chords.

How do you remember the notes on a fretboard?

The practice plan for memorizing the fretboard is to break it down into manageable sections, then put those sections together. The sectional approach will allow you to focus on one area at a time and memorize it before moving on. This is the most effective way to learn the fretboard and will eventually lead to total memorization.

It may seem like a lot of work at first, but with a little practice, you'll be able to memorize the fretboard in no time!

How hard is it to fret a guitar?

When playing the piano, many new pupils find themselves pressing too hard in order to get a clean sound. However, keep in mind that newbies may press too hard at times. Back off on the pressure just a little bit if you're a beginner. If the strings begin to buzz, apply slightly more pressure until they quiet down. With a little practice, you'll get a feel for just the right amount of pressure to use.