Flamenco guitar chords are different from regular guitar chords. They have a different sound and feel and can be quite challenging to learn. But once you get the hang of them, they're really fun to play.

What is the difference between classic and Spanish guitar?

If you're interested in learning to play Spanish guitar, there are a few things you'll need to know before you get started. First, it's important to choose the right guitar. While any acoustic guitar can technically be used for flamenco, Spanish guitars are specifically designed for this style of music and will give you the best sound.

Second, you'll need to learn the basics of flamenco guitar techniques. This includes using a lighter touch, strumming with your fingers instead of a pick, and incorporating percussive techniques like rasgueado into your playing. Finally, it's also important to listen to a lot of flamenco music so that you can get a feel for the style and learn to play along with the rhythm.

Flamenco guitars are typically played with a lighter touch than classical guitars, using your fingers instead of a pick. This allows for a more delicate sound and also makes it easier to incorporate percussive techniques like rasgueado into your playing. Rasgueado is a strumming technique where you use your thumb and first two fingers to strike the strings in rapid succession.

So, what are the main Spanish guitar chords?

The Am - G - F - E chord progression is the most famous and well-known Spanish chord sequence, which may be readily played in the first position (Frets 1-4). These chords are the pillars of Spanish music, and they're present in almost every song or composition is written in Spain.

So those are the basic chords you need to get started playing Flamenco guitar. With these four chords, you can play hundreds of songs and progressions. Just remember to keep your strumming light and percussive, and don't be afraid to experiment with different techniques. With a little practice, you'll be playing like a pro in no time! 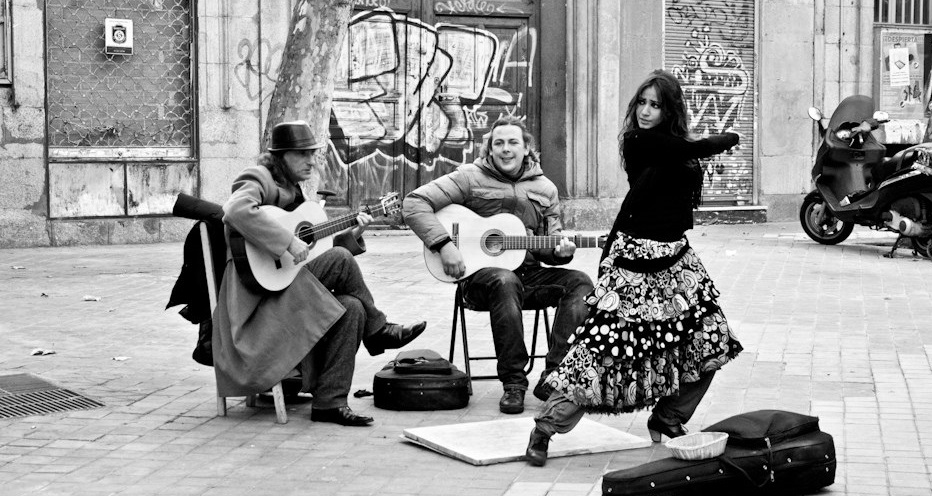 That is a popular beginner Spanish guitar piece that flamenco guitarists everywhere learn. It's a great place to start because there are three distinct sections with varying levels of difficulty. The first section is the simplest, using only Am and G chords. The second section adds the F chord, and the third section introduces the E minor chord.

This song employs the ‘raking' strumming method, which can be learned through the 'up/down' drill. This approach should be used on all three rhythm sections in the songs outlined above. In the flamenco song, the fingers are utilized in a downward raking technique, with the right-hand nails rubbing over the strings. Traditionally, flamenco players have developed their right hand's nails into plectrums, which serve as plectra. The nails' length and shape will play a significant role in the sound produced.

The right hand is positioned over the strings with the thumb on the back of the neck and the first three fingers extended towards the strings. The pinky is curled underneath to avoid touching the 6th string. The index finger should be positioned behind the first string, with the middle and ring finger behind the second and third-string respectively. The action of 'raking' from bottom to top produces a distinctive noise that resembles castanets.

When learning this strumming technique, it is important to practice with a metronome so that you can keep a consistent tempo. Begin by playing at a slow tempo and gradually increase the speed as you become more comfortable with the strumming pattern.

Once you have mastered Malaguenas, you can move on to other popular Spanish songs such as Solea por Bulerias and Sevillanas. These tunes are slightly more challenging, but they will help you develop your skills and technique even further.

Guaranamera is a traditional Spanish guitar melody. It's a very simple tune to play, and it has lyrics to sing along with, unlike malaguenas! Listen to the song in the video above to get an idea of the melody and time signature. Guantanamera is played in 4/4 time, which means there are four beats in a measure and each quarter note gets one beat.

The song La Bamba was originally a Mexican folk tune that Los Lobos popularized in 1987 and has been covered by many other artists since. The nice thing about this song is that it's the same as Malaguenas in that there are three parts to learn, which go together in one piece or can be played separately. Let's start with the bassline. Play only with your thumb, or use both your thumb and index finger to play the bassline again.

Now that you know the bassline, it's time to add the chords. The chords in La Bamba are Am, G, F, and E minor. You can play them in any order you like, but most people start with Am, then G, then F, and end on E minor. The last chord progression is a little different. It goes Am-G-F-E7. The E7 is just like an E minor chord, except you add your pinky on the 7th fret of the first string.

There are merely three chords in La Bamba. G, C, and D. The song is in a 4/4 time signature and is played using the raking technique described above. To get a feel for it, start by playing only down strums, then add in some up strumming as you become more comfortable with it. For each chord, you will play three strums (up or down), but on the D chord, you will play six because there are six lines below the chords (in the tablature).

When you're ready to move on to other songs, check out our lesson on Paco de Lucia's "Entre Dos Aguas." This song is slightly more challenging than La Bamba, but it will help you develop your skills and technique even further.

How to practice Spanish guitar chords? 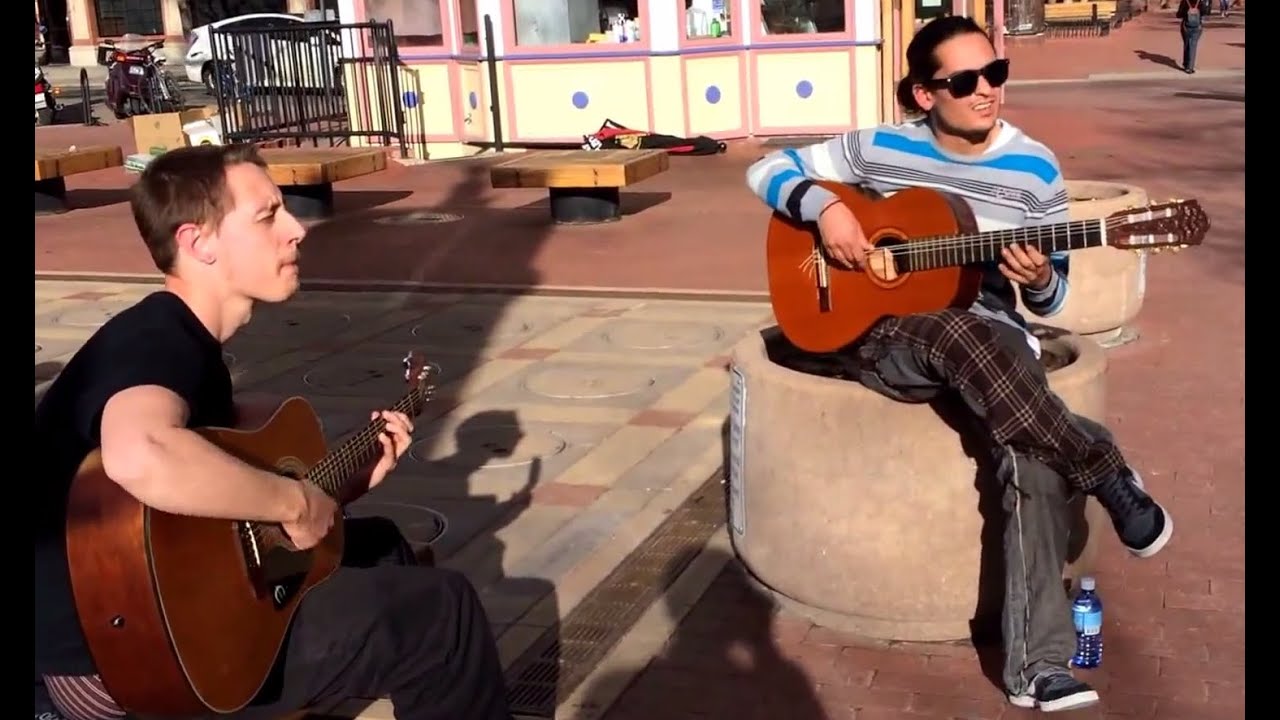 The following is a list of some basic chords that every guitarist should know:

Now that you know some basic chords, you can start practicing them. Start by playing each chord slowly and cleanly. Once you can play each chord without any mistakes, try picking up the tempo. You can also try adding some embellishments to the chords, such as strumming patterns or hammer-ons and pull-offs. With a little practice, you'll be playing Spanish guitar chords like a pro in no time!

What key is most Spanish music in?

The conventional tuning in guitars confines flamenco music to a small number of keys. The most popular are A minor and D minor (E Phrygian and A Phrygian, respectively).

A minor is the key of choice for many cante (singing) styles and forms such as soleá, seguiriya, fandangos, tangos and bulerías. It is also used in some rumba flamenca songs such as "La Sombra de tu Sonrisa". D minor is associated with the dance forms of fandango de Huelva, fandango de Alcalá, farruca and bulería. In fact, D Phrygian (the dominant mode of D minor) is sometimes called the "flamenco key".

Some other keys that are commonly used in Spanish guitar music are E minor, C major, and G major. Knowing these keys you will be able to play a wide variety of Spanish guitar music. E minor is used in the cante (singing) styles of petenera, siguiriya, and tangos. C major is associated with the Dance form of sevillanas. G major is used mostly in fandangos de Huelva and fandangos de Alcalá, as well as some rumbas flamencas.

Now that you know some basics about keys and chords, you can start practicing your Spanish guitar skills! With a little practice, you'll be playing like a pro in no time!