How can you sound 'jazz-like'?

This question is probably one of the most common questions among beginners in jazz. The answer, however, is rather complicated because there are several components that go into this concept of sounding 'jazz-like'.

The above examples are very basic and consist entirely of first inversions on each chord. While first inversions on each chord are not entirely characteristic of jazz it does provide an extremely good starting point for beginning improvisers because it provides them with chords that are close to the root note (first note) which makes learning major scale/minor modes easier since they draw notes from those scales based on the root, third, fifth, seventh of each chord respectively.

What is the role of chord progressions in jazz?

Jazz chord progressions are extremely important to jazz improvisation because they provide key information for the player (tonic, subdominant, dominant, etc.) which allows them to paint a better musical picture in their heads. Also, common chord substitutions like flat-VII oftentimes provide that extra space needed to make the chord progression sound more typical of jazz.

Jazz chord progressions can sometimes be a bit tricky because they oftentimes contain more 'jazzy' chords than 'typical' major or minor chords. Chord scales that are specific to each chord type will be discussed in the next section.

On the surface it might seem like jazz chord progressions are very complex and difficult, but after understanding how they function their role becomes very clear; to provide the improviser with musical information about what notes-to-play over each chord change.

What is the process for creating jazz chord progressions?

The process for creating a jazz chord progression is to take a couple of different common chord types and play them in succession while making sure that the overall sound of the progression sounds good. Over time you will begin to memorize common 'jazz' variations to each type of chord which will help you develop your own custom-made jazz chord progressions. 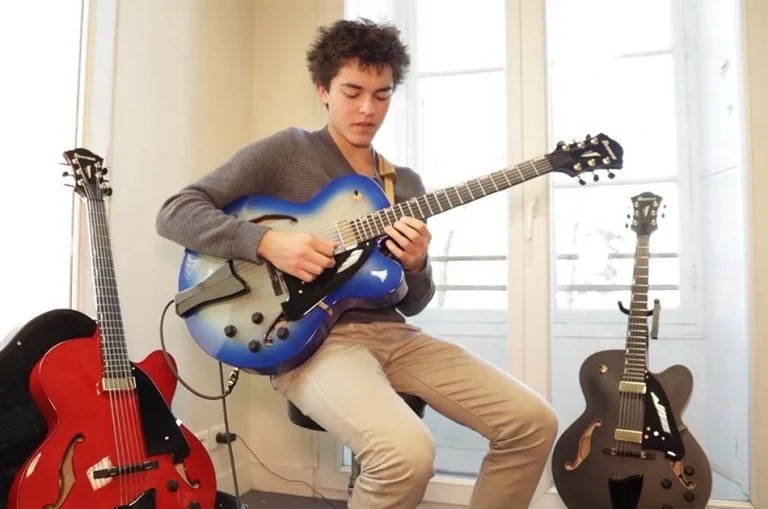 First off, if we consider a Cmaj7(9) chord as a "home base" of sorts, we can consider the following chord types to be closely related: Cmaj7(9), C6/9, CMaj7(#11), Am7(b5), A6/9, Dm7(b5), G13sus4. If you notice that each one of these chords has either a major third or minor seventh above the root note you will understand why they belong to the same family.

Another way to include additional notes from outside the key center is by including at least one flat-VII (diminished triad) in your progression which oftentimes implies a #iv or flat-IV in context. The diminished triad consists entirely of flatted notes and can oftentimes be found in the following chord types: dim7, dimMaj7, dim6/9. Common jazz chords that are not closely related to any of the above are maj7(#11), m(maj7)/maj7, 7sus4, 13b5/#5 (which is a bIIImaj7#5)

Like we mentioned before "jazz" style chord progressions frequently contain 'jazzy' chord types like flat-VII (#iv), flat-VIIMaj7 (#vii), Maj13th(#11). These types of chords have their own unique sound that because of this these chords were labeled as being 'mode'. We will discuss modes in detail under the "What is improvisation?" category.

What are common song forms used for jazz chord progressions?

Jazz progressions oftentimes fall under either of these three specific 'form' categories:

Is there a formula for writing simple jazz chord progressions?

Yes, while it might be difficult to explain the process of writing music in words it is relatively easy to do once you have some experience under your belt. The 'formula' consists of three parts:

The tonic chord is also known as "Homebase" or "key center". Any note that lies outside the key center can be used more or less freely without too much tension being created within that specific section. If you are playing over the tonic chord then this is where your improvisation should reside.

The subdominant chord works very closely with the tonic because of their close proximity to each other on the diatonic scale. This is why we oftentimes use the same note names while improvising over both chords. The subdominant chord usually occupies the fifth and fourth scale degrees (and sometimes even contains a minor third).

The dominant chord is almost always built on the fifth scale degree of the key. If you do not know how to build a dominant seventh chord then you should definitely learn that before reading further into this article. Playing off of the dominant tones within your solo is an essential part of the jazz improvisation process because it provides a certain tension/release element that gives your solos character and personality, just like with any other musical style.

This is the first most popular jazz chord progression and is oftentimes referred to as the 'Bird Blues'. This pattern uses a common jazz substitution: flat-VII (Bb7).

You can play it with different keys, For example, with the C key, it would modify to Cmaj7/Bb - D7/F - Gmaj7/C. This progression will give you the sound of blues with a little extra 'spice' (the Bb7). You will play such songs as 'Blue Bossa', 'Blues Connotation'

If you want a jazzier sound than the original 2-5-1, try replacing the IV chord with a minor chord (Am) and V chord with a major chord (Dm). This pattern is typically used in songs such as "Giant Steps" and "So What". This progression will give you more of a modal/pentatonic type sound. 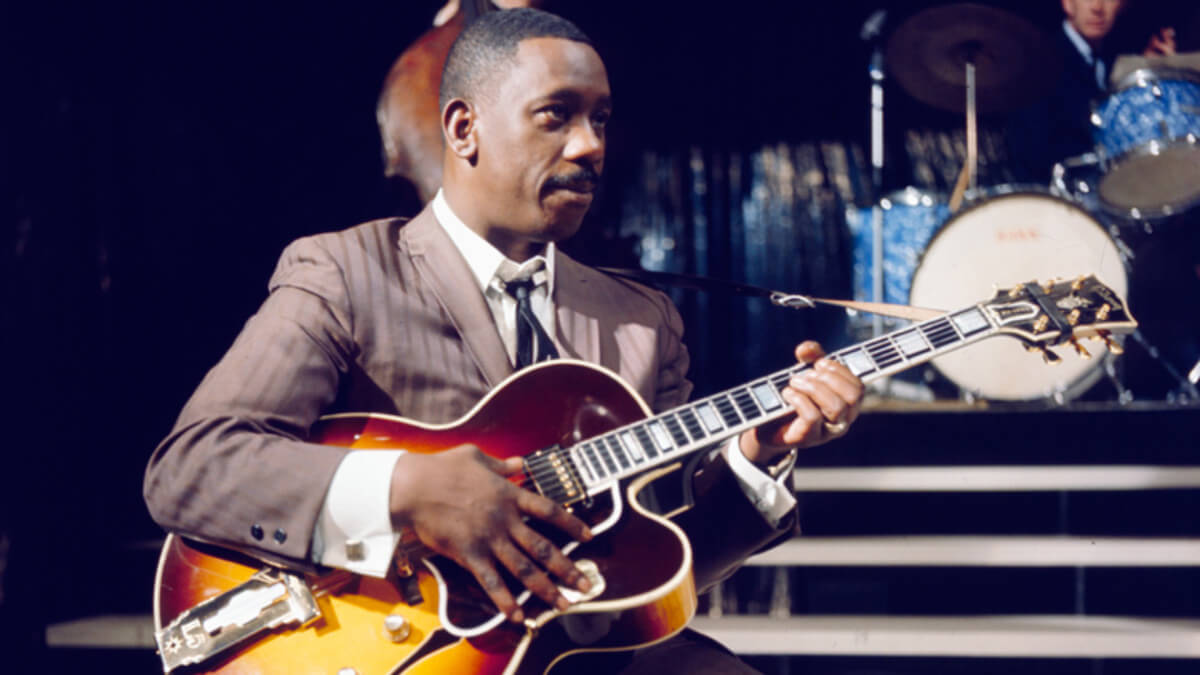 Another one is a jazz chord progression that will help you get the sound of Latin or bossa nova. This one is commonly known as "Girl From Ipanema" and is often used to get a 'Latin' feel in your playing.

It has a very nice smooth sound that provides you with chord relationships such as tonic (I), subdominant (IV), dominant (V), and supertonic (II). You will play such songs as 'So What', 'All Blues', and 'Corchado'.

This progression provides us with chord relationships such as tonic (iv), dominant seventh (VI7), minor seventh flat fifth (ii°7), and major seventh (V7). You can play it with different keys, For example, with the C key it would modify to Cmaj9/E - F#°7/G - A°/G - Dm6/F. This one is usually used in songs such as "So What" and "'Round Midnight". This jazz chord progression will give the sound of Latin or bossa nova.

How can you master these chord progressions?

Practicing chord progressions is a lot easier than it first seems. The first step you must take before even playing through these chord progressions is to have a good understanding of the diatonic scale. This knowledge will enable you to find out where your tonic, subdominant, and dominant chords are located on the keyboard.

After this has been established, simply play each chord in its given position one after another just as if you were strumming a C major chord for 4 beats, etc. If you want to be able to improvise over jazz chord progressions then just follow these three steps: 1) learn all twelve keys 2) understand how scales work 3) practice applying scales to real musical situations (i.e. chord progressions).

You will find that jazz chord progressions are much easier to master when you can change keys and use them in your solos. To do this, you must practice the diatonic scales in all twelve keys which is what we learn next in our lessons on how to play scales. Keep up the good work!

What are other tips on how to play jazz with guitars?

Well, improvisation is the key to any good jazz performance, so you can't ever neglect your soloing skills. Jazz guitar improvisation involves a lot of scales and re-harmonization techniques so it's important that you have a firm grasp of all these concepts before you can really call yourself an accomplished jazz guitarist.

Another important thing is being able to easily transition between chord progressions without having too long of a pause - it just sounds bad otherwise! So learn some chord substitution methods to help change keys at ease. The order in which you play chords will also affect the overall sound and mood, depending on what style of jazz you're playing (i.e. smooth versus upbeat). Experiment with different orders and see which ones suit your taste musically.

In addition to this, using guitar techniques such as slides and bends can help paint a more vivid picture in your solos which will make it that much more interesting for the listener! To learn these techniques if you haven't already because they'll definitely come in handy when playing jazz music. Another important thing is to perform with a good-sounding rhythm section - so learn how to comp along with a bassist and/or pianist.

Last but not least, don't neglect the importance of learning standard tunes - bop tunes are crucial for any aspiring jazz guitarist who wants to gain recognition from other serious players. If you know enough tunes by ear then jamming with other musicians should be much.

The main idea of playing jazz is to walk the walk and talk the talk. So just remember that if you want to play jazz guitar, you have to learn a lot of different things: scales, chord progressions, re-harmonization techniques, walking bass lines, standard tunes, etc.

Don't worry about learning everything at once though - it's important to improve your technique as you go along so don't be too hard on yourself. In fact, practicing jazz is a lifelong pursuit so enjoy it as much as possible.

Practicing jazz can actually be really fun and rewarding! If this kind of music gave many people joy then there's no reason why we shouldn't try our best to preserve it and pass it on for generations to come Next time someone asks "how do you play jazz guitar" you'll have a pretty good answer.

In this article, we have learned how to play jazz by learning some very important topics. These topics include learning how to switch keys, using re-harmonization, playing with a rhythm section, and also some beginner tips on improving your playing. Keep up the good work!