In this article, you can find out everything about the electric guitar, the different models, and their best-known representatives including Gibson Les Paul and Fender Stratocaster!

What is an electric guitar?

In contrast to the acoustic guitar, the electric guitar has one or more pickups. Pickups - as well as other electronics such as volume and tone, controls installed on the body, which amplifies the sound electrically.

For the sound, you also need an amplifier, which is connected to the electric guitar by means of a cable and makes the signal audible.

What types of electric guitars are there?

Solid-body is the name of the classic board guitar, the body of which is usually made of solid wood. Classic examples are the Fender Telecaster and Stratocaster or the Gibson models Les Paul, Gibson SG (Solid Guitar), and Firebird. Solid-body electric guitars are the most common electric instruments to be found.

Semiacoustic guitars are also called semi-acoustic or semi-resonance guitars. These instruments have a hollow body with resonance openings (F-holes) into which a solid block has been inserted, which usually extends from the base of the neck to the rear strap button.

What is characteristic of this electric guitar body type is that the resonance body is only half there, hence the name semi-resonance. Gibson's ES-335, known from jam rocker Warren Haynes, fusion player Larry Carlton or rock & roller Chuck Berry, or jazz guitarist John Scofield's Ibanez AS-200 is typical semi-acoustic electric guitar. Many blues and rock guitarists, such as B.B. King, Alvin Lee, Eric Clapton, and Freddie King played semi-acoustics.

Archtop actually means "vaulted ceiling", but has crept in as a synonym for the thick jazz guitar with the classic F-holes as resonance openings: a full-resonance guitar that also works purely acoustically, but is also equipped with one or more pickups.

Thinline electric guitar type has a chapter of its own, because there are several, sometimes contradicting, definitions for this term:

Thinline electric guitars are fully acoustic instruments equipped with pickups, only with a frame height (= body thickness) of approx. 5 cm. They do not have a continuous block or similar inside the body, which clearly distinguishes them from the Semiacoustics.

The classic Thinline electric guitar type representative is the Gibson ES-330, which was played by jazz guitarist Grant Green, among others. But also rockers like Ted Nugent with his Byrdland or pop stars like the Italian Zucchero (he plays an ES-120 among others) have already been able to make good music with Thinline guitars.

The Fender model Telecaster-Thinline would of course not be a thin line according to this definition; it was often referred to as the “semisolid” electric guitar body type. With this shape of guitar (as with the Framus Jan Akkerman), more or less large hollow chambers were milled out of the massive body.

Here is the other, equally widespread Thinline definition approach: Accordingly, “Thinline” is a generic term for all hollow and semi-hollow guitars that do not exceed a depth of approx. 5 cm.

A semi-acoustic ES-335 is therefore just as Thinline as a fully resonant ES-330.

With regard to the Fender Thinline Telecaster, this means: the differences between semi-acoustic and semi-solid (semi-solid) are defined by the ratio of enclosed air to the proportion of wood. If there is more air (e.g. ES-335), then it is semi-acoustic; with more wood (e.g. Tele Thinline) it is a semi-solid guitar. 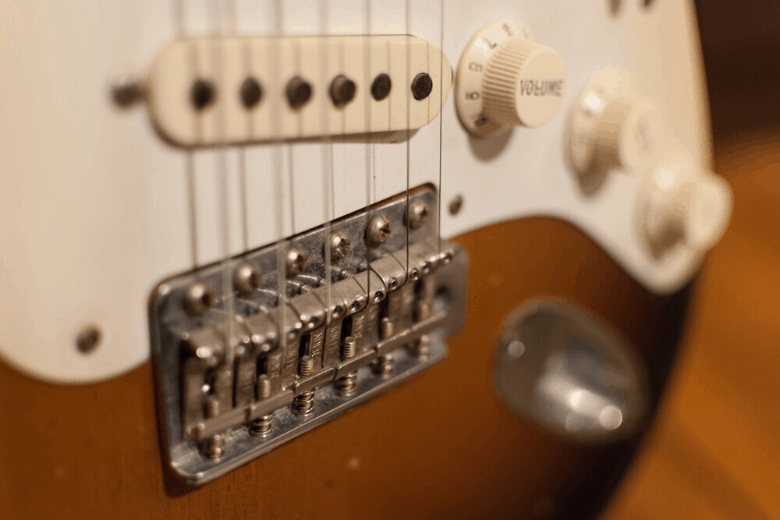 And what about the electric guitar bridge types?

There are many different types of electric guitar bridges out there. Here is a brief rundown of some of the most popular:

The most frequent sort of guitar bridge is the fixed bridge. It's simple to use and has a classic design that appeals to beginners, making it an excellent choice. A fixed bridge maintains the strings in position at the correct tension, allowing you to easily tune your guitar and keep it in tune.

The tremolo bridge is a form of a bridge that allows the player to create a vibrato sound by rapidly changing the string tension. This may be accomplished by moving the tremolo arm (also known as the whammy bar) or pressing down on the strings with the palm of your hand.

The tremolo bridge is a popular option for musicians who want to add expression to their playing. It allows you to make a wide range of sounds, from mild warbling effects to extreme, piercing feedback.

A tremolo bridge that is not connected to the guitar's body is known as a floating bridge. The bridge may now “float” over the strings, allowing for an increased range of motion and making it simpler to produce vibrato sounds.

The Paul Bigsby-invented vibrato tailpiece is a tremolo bridge with a vibrato arm that was originally designed in the 1950s. It's comparable to the floating bridge, but it has a lever on which you can loosen or tighten the strings. This lets the musician produce a broad range of tones, from subtle warbling sounds to more pronounced vibrato effects.

The wrap-around bridge is a form of a bridge that encircles the guitar body. This design keeps the strings in place and at the ideal tension, making it simple to maintain your instrument in tune.

The wraparound bridge is a popular option for guitarists who want a simple, easy-to-use bridge that is easy to maintain in tune.

The Tune-o-Matic bridge is a popular pick for players who want a simple, easy-to-maintain bridge that is easy to tune.

A suspended bridge is a type of structure that "floats" on the strings. This design helps to keep the strings in position and at the proper tension, making it simple to tune your guitar and maintain it in tune.

Suspended bridges are popular choices among players who seek a simple, easy-to-maintain bridge that is easy to keep in tune. 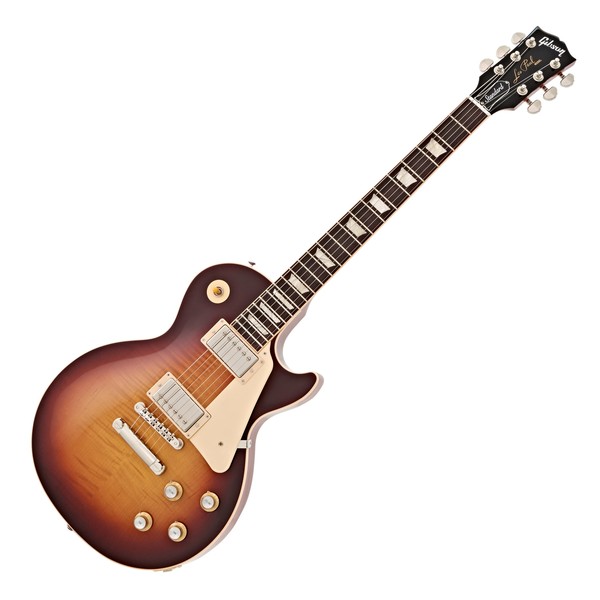 What are the most famous electric guitar models?

Aside from all these elegant electric guitar body shapes, the model also makes difference when it comes to choosing an instrument. Here is a short list of some top-notch guitar models:

The Gibson Les Paul is undoubtedly one of the most important electric guitars in this field. Their sound is often referred to as fat and sustain-rich. This arises among other things. through the glued-in neck. The most popular users include Led Zeppelin musicians Jimmy Page and Slash, formerly with Guns N ’Roses.

The epitome of the electric guitar is the Fender Stratocaster. A special feature of the "Strat", as it is also called, is the neck screwed onto the massive body. This electric guitar is popular worldwide for its rather wiry sound and direct response. Especially Jimi Hendrix made the Stratocaster popular with his virtuoso style of playing at the end of the 1960s.

The Telecaster, which was first published under the name Broadcaster and then Esquire, also comes from Fender. Their bright, high-pitched sound appears mainly in country music. The "Tele" also found its way into blues, rock, jazz, and pop. Like the Stratocaster, the Telecaster is also a screw neck guitar.

In addition to the solid-body instruments, the semi-acoustics are another branch in the variety of electric guitars. With their F-holes, these guitars look like acoustic models and for the most part, they are. However, in contrast to real acoustic guitars, they are overall narrower and have a solid, continuous, elongated wooden block in the middle on which the pickups are mounted. These semi-acoustic models provide different resonance properties, which can be described as warm and bold.

One of the most important manufacturers is once again Gibson, above all with its ES-335, which, along with other electric guitarists, also played rock & roll star Chuck Berry in the 1950s. Furthermore, u. a. also Rickenbacker, Gretsch, Fender, and the German producer Höfner (internationally known as Hofner) were legendary semi-acoustic instruments.

In our list of the classic models of the electric guitar, only the jazz guitar is missing. It has a fully acoustic body on which one or more pickups are attached. Well-known and style-defining models of this electric guitar are, for example, the Gibson ES-175 with its pointed cutaway in the body, which is used to better reach the upper fingerboard layers.

The world of electric guitars is so diverse, that you will undoubtedly find your next guitar inspiration from the models mentioned above.