Home Guides DADGAD chords: how to play and where to use?

If you're a fan of alternative tunings, then DADGAD is definitely one to add to your repertoire. This tuning can be used for a range of genres, from folk to metal, and everything in between.

What do you know about it?

So what are DADGAD chords? Put simply, they are chords that are played in the DADGAD tuning. This means that the strings are tuned to the following notes: D, A, D, G, A, D. One of the great things about this tuning is that it's very versatile. You can use it for a variety of different styles of music, and it'll give your playing a unique sound.

If you're just getting started with DADGAD, then there are a few things you should know. First, it's important to understand how the tuning works. The best way to do this is to start by playing some basic chords in the tuning. Once you've got a feel for how the notes work together, you can start experimenting with different voicings and progressions.

Another thing to keep in mind is that DADGAD isn't just for acoustic guitar. You can use it for an electric guitar as well, provided you have the right setup. If you're using an amplifier, make sure you have a distortion pedal or other type of effects pedal that can give your sound some extra edge.

So what are you waiting for?

What is DADGAD tuning?

The hardest tuning to master is DADGAD, which is also known as Celtic tuning because it's commonly used in, well, Celtic music. That said, you'll find it in Indian and Moroccan folk music. When you strum the strings, you'll hear an open D chord. But that doesn't mean you can only play D chords in this tuning.

DADGAD is an alternative guitar tuning where the strings are tuned to the following notes: D, A, D, G, A, D. When you strum the strings in DADGAD tuning, you'll hear an open D chord. But that doesn't mean you can only play D chords in this tuning. In fact, DADGAD is a very versatile tuning that can be used for a variety of genres, from folk to metal.

Because DADGAD is a simple tuning to comprehend since its name indicates the notes you'll be tuning to - which is very beneficial! You'll be changing your guitar's standard tuned strings (E, A, D, G, B, and E from the lowest to the highest) to D, A, D, G, A, and D. And that means the open strings will form a Dsus4 chord.

How do you play to it?

You can play a D chord in DADGAD tuning with only one finger (much easier than the guitar's standard D chord). Simply strum your G string at the second fret with your first finger and you've made your first chord in DADGAD tuning! The other five strings can be left open. If you're not familiar with DADGAD, or alternative guitar tunings in general, this may seem a bit strange at first. But don't worry, you'll get the hang of it in no time. 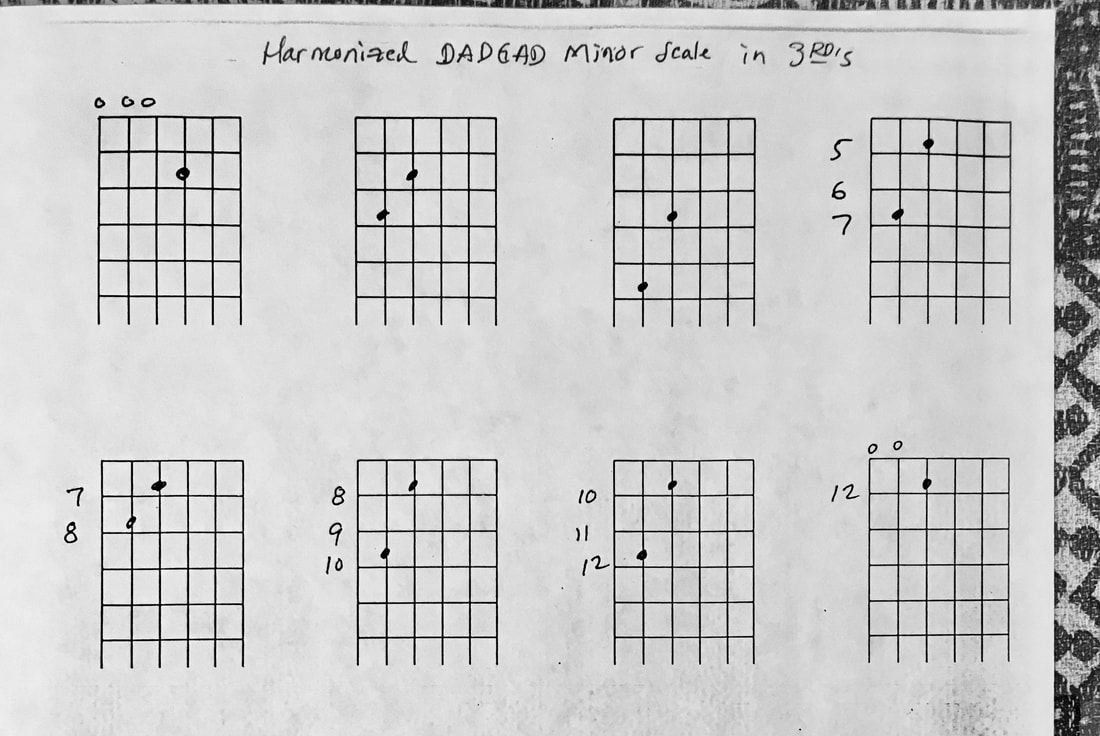 To play an A chord, simply slide your entire hand two frets up the neck on the G chord shape. The first finger should now be on the sixth fret of the G string, with the second and third fingers on the seventh fret of each low D and A string. While playing the A chord, you can leave the high E string open or play it with your first finger on the fifth fret.

To play a Bm, start by sliding your first finger up the G string one fret to the seventh fret from the A chord. Simultaneously, slide your second and third fingers up the low D and A strings two frets higher on the neck to reach the ninth fret. And that`s all!

So, DADGAD chords are simply a matter of sliding your fingers up and down the fretboard to create different chords. The hardest part is getting used to the new tuning, but once you've mastered that, you'll be able to play a variety of chords in DADGAD. Give it a try!

What is DADGAD tuning good for?

The matching of D A D G A D to Celtic music is due to the fact that it allows for the use of a variety of movable chords, which keep open strings. These serve as drones on either the bass or treble strings, mimicking traditional Scottish and Irish pipe music voicings.

In general, altering the guitar to an alternative tuning (particularly open tunings) makes chords in a specific key much easier to grasp than standard. For example, you can play a D chord with only one finger in DADGAD tuning, and all of the other chords you'll ever need may be constructed using just one chord shape up and down the neck.

Have you ever considered that all of these artists' songs sound similar when listening to them? Because, while the C, G, D, F, Am and Dm chords in standard tuning are a wonderful place to start for any budding guitarist, many musicians never develop beyond these basic chord forms and utilize them for every song. In DADGAD, the standard guitar chords are still there but they're not the only game in town. You can explore a whole new world of chord voicings and progressions that will give your music a unique sound.

DADGAD tuning is also popular among metal and rock guitarists who use it for its heavier sound. Bands such as Metallica, Tool, and Alice In Chains have all used DADGAD tuning on some of their songs.

What songs can you play in DADGAD?

You might be surprised to know that plenty of songs can be played in DADGAD tuning. In fact, this tuning is often used for Celtic and folk music. However, you can meet these chords in popular pop or rock songs.

For instance, Photograph by Ed Sheeran uses these chords in the chorus. The Mumford and Sons’ hit I Will Wait also uses DADGAD tuning for the chorus, though the verses are in standard tuning. Kashmir by Led Zeppelin is another example of a good song that uses DADGAD chords. Mostly, you can find them in the middle of the song.

Remember, when writing songs with these chords, you don’t have to limit yourself to Celtic or folk music. Use them in any genre that you want! Who knows, maybe you’ll create the next big hit in DADGAD tuning. Composing in an alternative tuning is a great way to jump-start your creativity and come up with new ideas for songs.

So, there you have it! DADGAD chords are a great way to add some new sounds to your guitar playing. Be sure to check out some of the songs mentioned above to get started. And don't forget to experiment with different voicings and progressions to create your own unique sound. 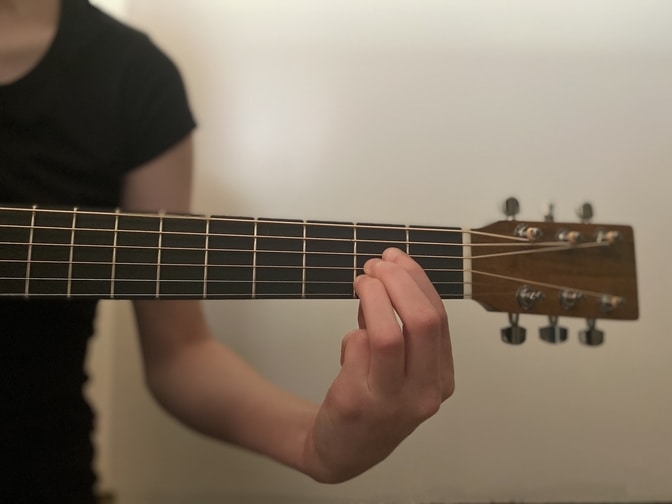 What else should you know before playing DADGAD chords?

There are many tips and hints for guitarists who want to try out DADGAD tuning. Here are a few things to keep in mind:

So, there you have it! Now that you know a little bit more about DADGAD chords, why not try them out in your next song? Who knows, maybe you’ll create the next big hit in this alternative tuning.

In case you like playing folk but don`t want to use DADGAD, there are other ways you can bring this sound into your music. For example, you could try using a capo on the 2nd fret and playing in the key of E. This will give you a similar-sounding chord progression without needing to tune your guitar to DADGAD. You can also try using a dropped-D tuning (D A D G B E) and playing in the key of D. This will give you a slightly different sound but it’s still close to what you’d get with DADGAD chords.

Many professionals also use a capo on the 2nd fret and play in the key of E. This will give you a similar-sounding chord progression without needing to tune your guitar to DADGAD. You can also try using a dropped-D tuning (D A D G B E) and playing in the key of D. This will give you a slightly different sound but it’s still close to what you’d get with DADGAD chords.

Every guitarist should know that DADGAD chords are a great way to add new colors to their playing. This type of tuning is perfect for solo guitarists who want to create a full, rich sound without the need for other instruments. And because DADGAD can be used in any genre of music, you’re not limited to only Celtic or folk songs. So go out and experiment with these chords in your own songs! You never know, you might just come up with the next big hit.